So, you'd like to do more than just follow along with my 2.11bsd as released project. You'd like to see if you can recreate the work I've done. So I've written up the setup I'm using in the hopes that it will be helpful to others. There's many other tutorials on how to do this generically, but there's some special needs for this project not adequately covered elsewhere. I've written up the instructions you'll need to manually install, as well as provided a script at the end of the blog to do the same if you are impatient and jump right in.
Please note: this bootstraps 2.11BSD pl 195. This is an older version of 2.11BSD that has different installation procedures than latter-day installation versions and should only be used for that version. Even 2.11BSD pl 0 willl have slightly different instructions since the disk partitioning scheme changed in patch 78 which changed the name of the /usr partition.

I've configured SIMH emulated the machine like so:
I've not taken the time to configure the network. All data transfer is done via the tape drive. It's way faster. Here's a picture of what real hardware for this configuration would look like, more or less. The tape drive on top isn't really a TS11 (it's something better: a Cipher drive that can do 6250bps, is front-loading, and likely a tms drive since it supports TMSCP, but pretend with me it's a ts device since that's the path I tested). 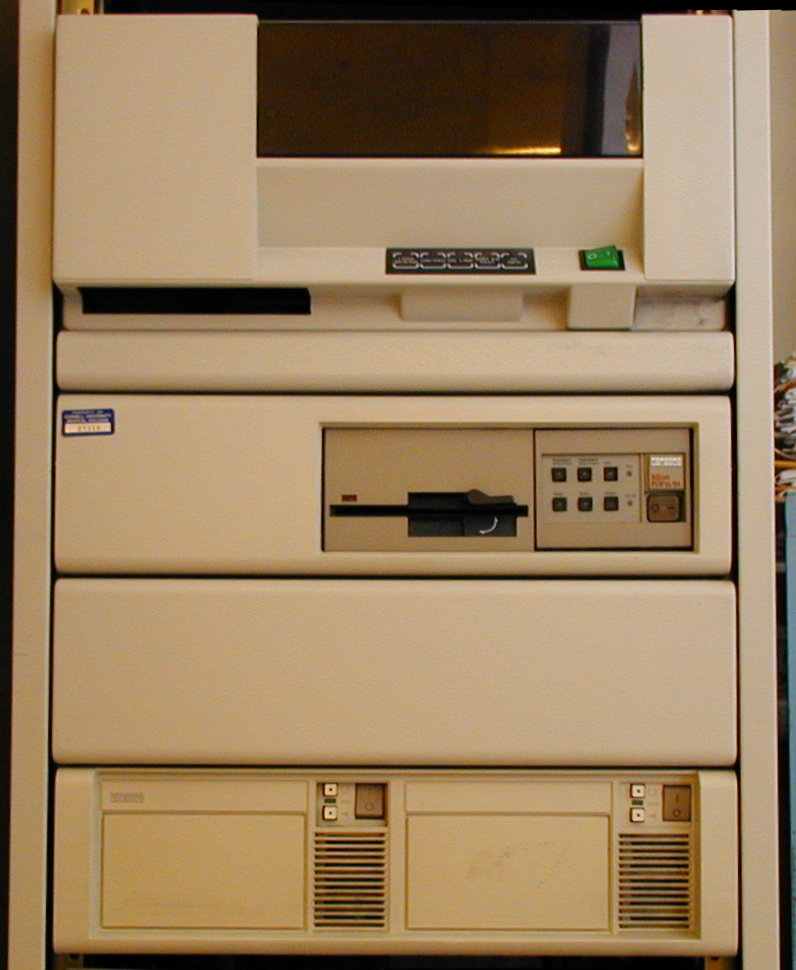 The rest of this document will assume the above configuration. Later I'll have you change it by commenting out or uncommenting lines. Save the above file to something like 2.11bsd-195.ini (the name I'll assume below). Or see the last section for a short cut.

This isn't as easy as it sounds. You can snag the raw bits from:

But that's not a tape. It has all the parts to make a tape if you had a real PDP-11 with a tape drive. So we'll have to fake it. I hacked the canonical perl script to do it. You can find the results at

so you'll need to fetch those two items and do the following:

which will give you the 211bsd-195.tap you need to do the install. That filename is hard coded in the perl script.

The pdf/ps files that are included with the patch 195 tape are for a newer version, so there's mistakes in them. The errors stem from disklabeling. It doesn't exist in 195, so you have to use old-school fixed partitions. You can read about the background on this in a previous blog entry. But see below for a twist with the RD54 disks i'm using...
On newer versions, the first file on the tape is disklabel, followed by mkfs, etc. On this older one, there is no disklabel, so the first file is mkfs, etc. This makes all the other fielding off by one in the instructions. This blog, however has the numbers right. It also makes this blog not completely useful for the newest version without adjusting...

A Word on Device Names in Bootloader

Device Names in the boot loader and stand alone programs are different than normal in unix. They used to be common, but now are unfamiliar to many, even for sysadmin. They are of the form xx(u, s, extra)file.
The "xx" is the name of the device. Two names will be important for us. The tape is "ts" and the disk is "ra".
The "u" is the unit number. It is basically the same as today, but with some weird rules if you have more than one controller. In this install everything will be unit 0, even though we have two disks. The second disk is for the recovery and will only be used inside unix.
The "s" is for subunit. For tape drives, it is the file number on the tape, starting at 1. For those that might not know, a tape has a series of records on it. These records are separated by end of file marks. There is also an end of tape mark. Both unix and the stand alone programs present this to the user as a series of files. To read a file, you need to know it's location and record size (hence specifying them when we made the tape above.
For disk drives "s" is the partition. Since this version doesn't yet have disklabels, we are using the standard rd54 partition scheme shown below. We will use it for both disks so that the scratch disk will become a bootable drive when we are done. "file" is the path to the file to boot. It's only meaningful for disks.
Finally, the ",extra" is optional for when devices are at non-standard addresses, so we won't use them. For those that must know, it is the CSR of the controller.

Use your favorite package manager to install simh. This will work with most of the recent versions of simh, so the specific version is unlikely to matter. Put the two files in the same directory. We'll be booting a number of times. The outline of what you'll be doing:
Once we are done, the system will be setup how it needs to be to build everything. That stuff will be in a separate blog entry, since it's too long to include with this one.
Alternatively, you could run the expect script that does the rest of this blog for you.

This one is very simple and straight forward. Here and below user input is in red. And <cr> means carriage return (or just hit the return key).

Directly at the : prompt above, you should continue with the installation. The restor program takes the image on the tape and creates /.

You should now be able top boot unix from the loader prompt. Note: there's no boot loader yet on the ra disk, so you can't boot off of 'RQ0' in simh just yet should you need to restart.

you should now be ready to install boot blocks and restore /usr and other filesystem(s), and configuring the system. Looking at the manual for ra(4), we find the RD54 has the following partitions;

so we'll just need to create the /usr partition. However, turns out that the man page is wrong. This doesn't quite match the source to ra.c, nor does it quite match the disktab entry which says:

which I'll admit is a little hard to read. I misread it the first time. pX is the length of the X partition. The entire disk is 311200 blocks long, so the pc entry clearly is for that. The pg entry is what we want, since pa is for / and pb is for swap and if you add pa+pb+pg you get 311200. If, however, you look at the disktab from the initial revision of 2.11BSD (at least what I think it is), it matches the manual. So we're going to have to be careful when we boot the ur2.11BSD kernel once we get to that point (which we will in the 2.11BSD as released project, but won't in the rest of the installing 2.11BSDpl195). This mismatch, btw, is one of the many motivating factors for disk labels. Patch 78, btw, changed this without updating the man page. Fortunately, the only change for us if we wish to go backwards from 195 to 0 is to change the ra0g to ra0c in the /etc/fstab... but this digression has gone on too long...

Once we've booted to unix, we use a fairly familiar unix to extract things. The rest of the installation goes as follows
Here's the exact commands to do all that:

and now you have a full system.

and you have a new system. ^D at the # prompt above gets you to the login: prompt.

And now you have a 2.11BSD patchlevel 195 that you can use to run my bootstrap scripts.

Shortcut All of the Above

Or, you can shortcut all this stuff. As I've said above, I've written an expect script that will do all the tedious typing above. While all this typing recalls the manual nature of Unix installations in a by-gone day, it's rather a pain to do more than once. So i automated it. Just clone my mk211bsd github repo, fetch the tape and run the expect script and all this will happen for you. Since the output is the same, i've not included in these instructions.

And you'll be able to skip directly to the "Running 2.11BSD" section since the expect script should do all the typing for you. I've run this script about a dozen times now, and think I have all the kinks worked out. This will give anybody that wants to help out with my 2.11BSD as released project the same setup that I'm using to bootstrap a 2.11BSD pl 0 userland. I'll describe how to do that in a future blog.

I'll blog about my big progress, and tweet about my small. I'm @bsdimp on Twitter.
Posted by Warner Losh at 9:11 PM

I've manged to duplicate your set up and watched your expect script install 2.11 BSD pl 195. Very nice! Looking forward to following along and doing more.

Thanks Warner. This is quite clear and works exactly as advertised. I really appreciate your highlighting the user entered stuff in red, makes it much easier to follow.