How to fix a Washing machine

Let's say you have one of those fancy washing machines with sophisticated circuitry.

Well, then if your machine is like mine, it sucks to be you.

Last night, before a trip, the Kenmore Oasis HE machine that we've had for many years started doing something weird. You'd turn it on, and it would start cycling from Heavy, to medium, to light, etc on the soil setting. It wouldn't stop doing it. And if you somehow got it to pause for a moment, the cycle would do weird things: spin at the wrong times, drain at the wrong times. And if you left it on overnight, it would suddenly spring to live at 1am just as you were falling asleep.

So, new parts for this would never arrive in time for me to install them before the trip.

So, what to do. I tried all the obvious fixes: reseat all the connectors. Do it again just in case. Get some rubbing alcohol and clean off the accumulated gunk on the board. None of these fixed the problem. So looking at the board, I thought "geeze, why don't I just remove the switch from the circuit: maybe it's gone bad and shorted out." I mean, if you're falling to earth, you might as well try to fly, right? The switch was wired into the circuit through a diode. Since the diode was SMT and the switch was through hole, I decided to desolder the diode (D59 in the pic). I had no rational basis for thinking this would work. Other folks have reported exactly this same problems on different washing machine forums, but the solution was always "start replacing boards" which wouldn't fly for me today.

So far, it seems to be working. I hope this repair will hold until I get back from my trip... 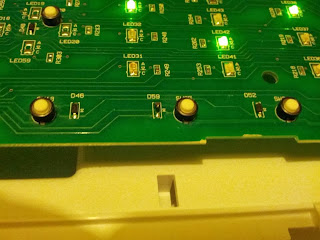 This photo shows my test run, where I just removed one side....

Who said these new washing machines are irreparable... Oh wait, all the repair guys that have come out and all the online forums, and this isn't really a fix so much as a kludge until I can get back to fix it right...
Posted by Warner Losh at 10:42 AM No comments:

What could be so hard about an external toolchain.... Step 1: How big a problem...

FreeBSD is moving from gcc to clang as its base compiler. This works really well for x86, and moderately well for arm. However, it doesn't work very well for any other architecture that FreeBSD supports.

Brooks Davis recently committed changes that he claims allow him to build FreeBSD/mips with an external clang and the cross-binutils port.

I thought "how hard can that be, I'll knock together a port for gcc that lets me use that instead of the native compiler.

So, with a little bit of svn foo, I was able to extract the differences in FreeBSD's gcc from the stock 4.2.1 gcc that it is based on. I thought the differences would be small and manageable. However, they were large. In excess of 10,000 lines in the diff file.

Undaunted by this large size, I started breaking down the diffs. Well, first, the diffs, excluding the docs, are 10,652 lines in size. I didn't save how big they were with the docs included.

So I went to separate out the wheat from the chaff. First up is 5172 lines of changes to x86. Why do we need that many changes to x86? Well, to support newer x86 hardware models. since I assume that will be in a newer version of gcc, I chose to totally ignore it unconditionally.

Next, I discovered 924 lines of changes for the FreeBSD configuration of gcc, plus various tweaks to gcc to make it the FreeBSD native compiler. Half of these seem relevant, the other half not so much (I'll discover how much later).

There's also about 2187 lines of bug fixes that are split between back-ports of gcc bug fixes and various warning cleanups to clang will be more happy. Add to that another 340 lines of g++ modernization...

The first 4 patches slotted into the gcc 4.5 nicely (config-guess changes, the config + arm + mips changes). After tossing out all the extra goo we had been dragging around in our tree, they are about 850 lines of diffs. After adding in the other architectures, I suspect this will double. Plus the other relevant gcc changes, we may see as many as 2000 lines of patches for any port that could be used as a system compiler for any supported architecture).

I have the beginnings of that port, but it is early days. It builds, but still can't make it through buildworld let alone buildkernel. The external toolchain support needs a lot of tweaks to make it happy with gcc, and there's still much I don't understand about why some of them are necessary.  But I'll save those for another time.

Anyway, that's enough for now. I'll report also on moving these patches to 4.6, 4.7, 4.8 and 4.9 when  get around to it. I'll also see what it takes to move them into upstream sources. That should have been done years ago, but that's another tale of woe I don't have time for just now, and even if I did I'm not sure that dirty laundry would be appropriate for my hacking blog.
Posted by Warner Losh at 7:01 PM No comments:

How C can bite you, an example

and consider its use here:

Seems simple and safe right? Well, not so much.  The 'C' standard states that when you have types that aren't of the same rank, a conversion must happen. So, since n is an int, and sizeof(foo) is a size_t (unsigned long), a weird conversion happens when you hit an error in foo. It returns -1, but that -1 is converted to MAX_ULONG, so the conversion is true, and we copy way too much memory smashing everything in it's path.

When a coworker asked me about this, I replied "And verily, thou shalt not compare an int to a size_t when thine int can be that which represents a plurality of deficit as well as a plurality of surplus." because it is easily clearer than the C standard...

Posted by Warner Losh at 5:29 PM No comments: