I've updated an old graph from a talk I gave in 2010 to have data up through today. The rate of development seems fairly steady.

When last I did this release, stable branches were flatter and lived longer. Now there's a fair amount of activity after the branch that continues for years. 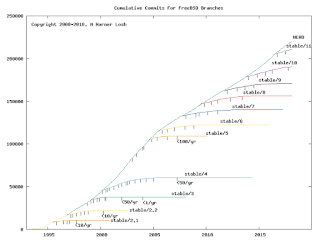 Note: The hash marks are generally releases. I've removed the 'artificial' commits that were needed as a result of the CVS to SVN migration the project did a few years ago. The 2.0.5 branch has been omitted, and the 2.2.9 release (never tagged in the repo and < 10 changes different than 2.2.8). I had release numbers on the hash marks in earlier revs, but that's too busy now.
Posted by Warner Losh at 10:09 AM No comments: